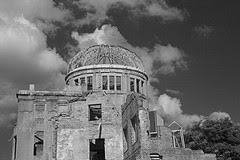 Hiroshima is one of the very few places on earth to merit secular pilgrimage and my fourth visit there was as important as the previous three. Each time the mark has been distinct and indelible: the first for the unforgettable imprint of the generosity of Hiroshima's people; the second with a respect for the apple doll-like older women who tended the park grounds, a thankless consequence at this peace mecca; the third time with the opportunity to identify the Children's Memorial as my favorite part of the park and this fourth occasion to drive all of it home one more time.

My past visits to the park have been early in the day or late at night, when I have been able to meditate on the place without interruption. Quiet debates would emerge and ebb away in some resolution that would leave me nodding to myself with a new notion about any number of small or big issues - the small more often than the large oddly enough. Should these kids be skateboarding here? Should the Dome be maintained as it survived the bomb or allowed to disintegrate? Do those women really have to be cleaning this place up after surviving that day as well?

Arriving around noon from nearby Miyajima, however, the solitude to nudge me into those reflections was not possible. The park teemed with school kids of all ages. There were enthusiastic elementary students all bonded together by matching ball caps of red, yellow or white, depending on the school. The kids were racing about in the leaves - the Peace Park is a park after all - choking back their lunches or asking the foreigners to indulge in their efforts to complete an English assignment during their travels. We encountered three groups of kids, all from schools in Kyoto near where I lived or taught in the past and I enjoyed shocking them with my Nihongo and familiarity with their neighbourhoods. (One group dared to tell their teacher within earshot that they did indeed ask me all the questions that they were assigned and I called them out to inform their teacher that all they did was thrust a paper in front of me to say "Peace message, please." Once a teacher, always a teacher.)

We wandered the park, starting at the A-Bomb Dome and gravitating toward the Children's Memorial on the opposite side of the river. It is hardly the visual icon that the dome is but it is much more of a focal point or a gathering place at the park. Where the dome invites detached, solitary silence and reverence, the Children's Memorial is the focus for the first stirrings of a civic engagement or embrace. In the harsh clear light of noon, on a day slightly cloudier than Hiroshima was on August 6, 1945 we watched the cranes arrive. We examined the cases where children from around the world added their cranes and good wishes. We watched classes of kids stand before the memorial to take turns to make pledges and speeches to one another. An entire Grade 6 class sang with reverence and hope while tourists like myself lingered on the edges of their rite of passage allowing them some privacy during a moment that so heart-rending or heartwarming to witness that had to be even more so to call your own. I redirected my gaze to the cranes, but my ears stayed with the children. When the song finished, I caught the eye of three of the boys, smiled and gestured quiet applause.

The cranes keep coming and coming.

The museum once again reminded me of the accurate words I heard in 1996 when I made this pilgrimage for the first time, "It will shake your heart." The crowds of kids from all over the country, mixed in with adults from all over the world moving about elbow or elbow, to be awed and horrified by what this comparatively little bomb could do. Both groups probably wondered if the other truly "gets it" the older wondering if the kids are absorbing the realities or if they are just getting the material they need to recite when they get back in the classroom and the kids wondering if the adults grasp what might be a uniquely Japanese tragedy. In the end, it is a question of what makes us human and in that there is probably reason today to feel a little more optimistic.
Posted by Pat at 4:53 AM