On the BBC over the last week they've been giving anniversaries for events from this week and I had reminders of how I got the nickname Forrest Gump with my friends in Japan. Everytime I went anywhere something happened. A note on Princess Di's death and funeral and another on the Swiss Air crash off Nova Scotia and I was able to say, "I was there for that. I was there for that." For a while earlier in August, back when W was rattling his sabre over Iran's nukes rather than trying to convince the world that he really cares about the "good folks of New Orleans" and that Katrina totally caught him by surprise, I wondered if I would be able to say "I was there when it happened" about this trip. Fortunately everything went well and all that I have to report from Iran is that the people are amazingly warm and generous, even though there is every chance that I have much more than they do.

I'm also happy to report that an airplane seat has never, ever felt so comfortable. This evening started off with a bit of chagrin when the driver called to say he would be along around 11pm instead 10 because there would be plenty of time to get on my plane. I managed to negotiate him into coming at 10:45. I arrived at a decent hour and got a decent spot on the waiting list, or so I thought. Higher levelled first class and business passengers with their gold or platinum or whatever coloured membership cards apparently bumped me down on a regular basis and by the time things kicked into gear I was 8th on the list. Fortunately, word was gonig around that Tehran traffic, yes even at 2:30am was proving notorious and that people were going to get bumped off the flight.

I bonded with a few others on the waiting list and we exchanged stories about past experiences, destinations and the strategies required to ensure one's spot on the plane. Eventually there was a bit of a scramble at the counter to get tickets for the last few seats. I got my ticket stamped by the supervisor and took my place in line to get my boarding pass and check my luggage. Just when I was about to get the pass, the supervisor, the same man who stamped my ticket to go not 30 seconds earlier, told me, "Full."

My chaperone had managed to get into the waiting area and tried to make things a bit more flexible and see if there was some way to accommodate me on the flight but again and again the answer was, "Full." Who is the star in this alliance?!

I finally lost it and let the supervisor know that he made a mistake. He replied that I was too slow getting into line for my boarding pass. Ohhh, Lufthansa plays musical chairs to determine who flies with them. I see. I told him again that it was his mistake not mine and that he ought to admit this. My chaperone wanted to shoot me before I said much more I'm sure. After questioning my own passivity over the last few weeks I felt I had to make a point, at least to myself and I gave him both barrels. Having let that out of my system I was ready to pencil in four more days in Tehran and a Friday departure, unless the supervisor was still spiteful on Friday night and decided that I could not fly until Krakovia was finally recognized as a nation. I settled down and the hope was held out for me that I just might, might get on the flight to Munich and make a connection from there to Frankfurt in time for my scheduled flight to Vancouver. After a steady hour of vigilant mediation and translating, my chaperone passed on the word that the supervisor admitted I was right and that his staff put people on the flight without telling him the numbers.

In the end the supervisor got me on the Munich flight and I happily boarded the plane and settled into the economy class seat to begin the journey home. Before the plane took off one of the flight attendants came to my seat and asked for my boarding pass. For a moment I thought there was a 50-50 chance that I would moan "Not again."

"You've been upgraded to business class."

The teaching is over. The students gave presentations today and the feeling of goodwill is strong with strongly expressed wishes that I come back and see or teach them again. There are times when working as a housepainter can be more satisfying than teaching in that you know what you have done at the end of the day, but I got a clear impression that I've had an impact on these people. Hopefully the goodwill remains after the marks are delivered. To that effect I've had second thoughts about how I could have best used my time in class and there are moments when I reflect on a particular student and wish I could have given him or her more time. Such is the reality of the teaching profession. Those feelings are stronger right now because of the intensity of the course and the time that we spent together.

Before departing the students gave me a gorgeous clock, which I've managed to get into my briefcase. A gorgeous piece of art combining three common Iranian craft styles into one piece. All in all it has been a good experience and I hope that I've found the determination to take a bit more control over other parts of my life. I've learned a lot about the way I manage a classroom and I look forward to the chance to tweak things a bit. Perhaps it has been a matter of the stress , but I've wondered at times if I've lost the plot and my ability to focus on things. A clearer idea of that will come to me when I get home.

For all the soul-searching I can do over the next little while, the foremost thing on my mind is my departure. I've been in a rush all day to get to the airport ASAP. My taxi driver asked me this morning when to go and I asked him to pick me up at 10pm so I could get to the airport in time to get a high spot on the waiting list. Just before heading out, Jaydeep, another professor from Calgary informed me that there is the back-up of a Munich departure if I cannot get on the Frankfurt flight.
Posted by PH at 4:11 PM 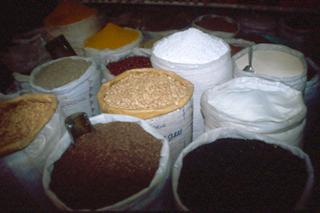 Thursday night, after the long day that set the tone for my last post, I went to Jam E Jaam, Tehran's first, and only, food court. One of the professors at the university mentioned it on a regular basis and its two mentions in my Lonely Planet further strengthened his resolve that we had to go. With that in mind and the clock ticking on my stay here, I was whisked away to a food court for, as they put it, a chance to ease back into North American life. Jam E Jaam was quite modern with a sporting goods store, a shop selling western foods and toiletries and even a small Ikea outlet.

I opted for Mexican and did a bit of people watching. After being surrounded by students all week I was expecting them to start coming out of the woodwork. Instead though, I saw younger people dressed as western as possible with women showing as much of their dyed hair as tolerable despite the gauntlet of signs reminding them to keep their heads covered. They were clearly trying to look more like Nastassja Kinski look in Tess than the dour, conservative look the ayatollahs want.

I went for a stroll to the nearest bazaar, which is about and hour's walk away. Another professor and I decided to venture out for a closer look at the neighbourhood. I also took the opportunity to pick up some dates and fire off a few more pictures of everyday life to complement my post card variety shots. It was an interesting stroll, especially through the bazaar where we could see bootleg Farsi copies of Madagascar and other recent movies, not to mention computer software. It was a hard slog back up the hill to the hotel but made for a very pleasant change of routine.
Posted by PH at 10:54 PM 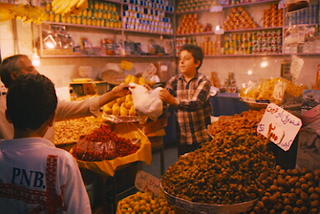 Showers yesterday morning was an indication that cooler weather was coming to Tehran. Today was my fifth day in a row in the classroom and unfortunately I just did not have the reserves that I can normally rely on the in classroom and I was a bit shorter with the students than I would have liked to be. At the same time, meeting the demands of 65-70 people at the same time can be a lot to deal with for a 9-5 day, but it has given me reason and cause to reflect on how I generally deal with stress or even people.

The intensity of the experience here is probably something that I haven't quite recognized. All sorts of little things have accumulated and over the course of time I do my best to laugh them off, rather than complain about them. Individually none of those things seems like enough to whinge and groan about but gradually a small toll was taken. I guess right now the question is whether it was a whole month's worth of it or just the consequence of a few very intense days as the course comes to a close and the pressure gets amped up a little more. I suppose some people would say I am allowed to have a day where I'm less than stellar, an even that I am more worthy of that in the classroom. Still, I feel it is a moment to look within and see what kind of person I am under stressful conditions and how to deal best with such things.

This is not, however, an entirely down-on-myself moment. I know that in a few hours I'll feel a bit more refreshed and have a clearer perspective on things. The month here has been quite demanding and for the most part it has been a test that has helped bring the best out of me at times and the experience in and out of the classroom, especially in, has been quite valuable to me personally and professionally. I've rediscovered my desire to travel thanks to my time in Isfahan and by the things that I have learned from my students/friends (Sunday they'll be friends).

Today though I am spent and pondering questions about how to ration my patience or figure out when it is best to bear with something and best to say enough is enough and make things a bit more tolerable rather than merely tolerate them. It is probably a question that faces all teachers. On that note, the experience has made me a better teacher.

A car stopped in front of me and asked for directions. I guess I'm blending in.

After leafing through an in-flight magazine loaded wih ads for cosmetic surgery I've started to notice more and more people with bandaged noses over the last few days.

Today the elevator is out in my hotel. No sign required.
Posted by PH at 7:07 AM