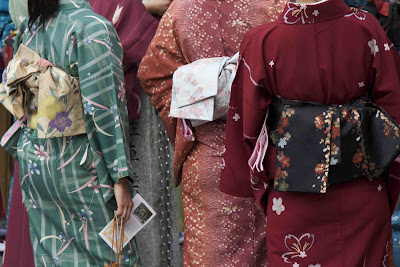 It was a good day to meander and one to be thankful not to be on the group tour and trundled along from place to place because of some tour guide's unknown motivations.

We took the subway across town and stepped off at Keage Station and headed north to Nanzen-ji, Eikan-do and the Path of Philosophy. Any one of these three places could have preoccupied as for the whole day and as it was we ended up crossing two other destinations off our to-do list for the day.

At Nanzen-ji we were first presented with the sight of a group of students all attired in traditional clothing. They straddled the age between high school and university and it was easy to assume the shots were commemorating a graduation but I still could not pin down their age. Through the trip we have seen a large number of people in traditional clothing. Part of it is the 7-5-3 Festival where families bring their children of those three ages to the temples to celebrate the occasion. There have been a number of times to dote on the sight of a 3 year old girl in a kimono still wanting and managing to bust out the toddler enthusiasm despite the formal attire she is packaged in. The juxtapositions have always been amusing and charming. Apart from the children though, there have been people of all ages. Mostly women in simpler kimonos but today there were a few male classmates in the group who were comfortable roaming the temple grounds.

The turning leaves continued to draw my focus and just when I was convinced that I had run out of ideas for what to shoot and how, I still found another nuance or background to photograph in. At Nanzen-ji there was a brick aquaduct that passed through to the south of the temple grounds. At Eiken-do there was a pond that reflected a deep blood red in the afternoon and was the refuge of a group of ducks that took great pleasure and splashing around and throwing themselves at one another. At the Path of Philosophy there was a mix of shadows and reflection on the water. All told, as I said earlier, each place enchanted and could have preoccupied us for the entire day. The one thing that has become true about this trip is that it is very easy to want to return to some of these places day after day and embrace that contemplation that sets in after a few minutes of staring at the space you are in.
Posted by Pat at 7:59 AM