Shopping
Today was spent in Osaka basically to pass a rainy day with a bit of pre-planned shopping to satisfy our fetishes for Japanese pottery and stationery. Osaka is nothing even closely resembling a respite from Kyoto. The opposite has always been true. Back when I lived in Osaka it was easy to lose touch with nature or even the passage of the seasons amidst all of the concrete. There are few of the character buildings and charming boutiques that we discovered in most parts of Kyoto that we have visited so far. In fact there was one occasion when I was reminded that fall was coming when I saw a banner outside a restaurant announcing a "fall harvest rice fair" - so easy it is to lose track of time in the concrete bowels of the subway system and the sheltered arcades of Osaka. For a bit of grit, however, and a feel for urban life without getting overwhelmed by the megagopolis beast that is Tokyo, Osaka can fill the bill.

One of the goals of the trip was to load up on Japanese pottery and the opportunities ranged in about the same way that hotel accommodations can. Comparable to the wide range of options that - for hotels, run the gamut from capsule hotels to 5-star luxury in Ginza - there is the comparable opportunity to range from the 100 yen stores to the masterpieces that are made either by local living potters or classic Japanese pieces (and prices) that would take your breath away. We have seen the masterpieces in the little boutiques and we'll stop regularly at whatever boutiques we chance upon next.

For our purchases, we focused our attention on two streets that specialize in supplying local restaurants. One is in the south part of Osaka and the other is in Tokyo near Asakusa. Apart from the dishes, there are countless shops selling banners, signage, chopsticks, cooking utensils, aprons, and plastic food. The shops were each an experience in themselves. Some were crammed with single samples of their inventory and every little pile that we sorted through provided a new treasure or a nuance on the presentation of a dish. Others had their entire inventories out on the shop floor, making browsers tread the aisles with the uncertainty and the quest for balance that is reserved for tightrope walkers in a circus. Some of these more crowded shops made me wonder aloud if they made more money on breakage than on sales that got out the door. In the end we hit (wrong word?) two shops for dishes and we will probably add a bit more that we will rationalize as serving dishes. We will let you know when we get over looking at the stuff and decide to break it in.

Food (for the non-fish eater)
We have managed to minimize our exposure to fish throughout the trip. Not that it is my goal but Nadine is not a big fan of fish and we have been steering clear. Our trip has made me recall an anecdote I heard from tourists who came to Japan during the 2002 and either complained or boasted that the ate McDonald's for their entire trip. We've eaten cheaply and enjoyed a lot of the food we've had.

On our way through Osaka we noticed a street that was closed for an imminent festival. We wandered the street and there were food vendors of all sorts on hand. In our wandering we scooped up yakitori, which is basically a chicken kabob, some karaage, fried chicken which is not to be confused with kurage which is jellyfish and okanomiyaki, Nadine's favorite. Okanomiyaki is hard to describe and the comparisons to pizza or omelets don't quite suffice. We have had it twice so far and the b 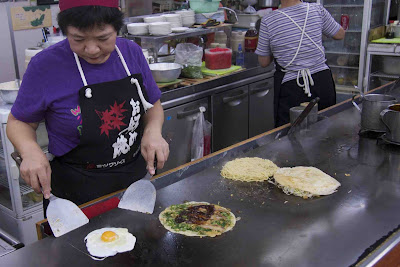 est place to have it is Hiroshima which has its own version of it that includes soba noodles in the recipe.

Other items:
Ton-katsu at Katsu Kura: Ton Katsu is a breaded pork cutlet and Katsu Kura is a chain of restaurants, mostly in Kyoto. There other chains that do a good job of it but the Katsu Kura experience offers a bit more ambience with their nouveau Japanese decor, all you can eat salad, rice and miso soup and the simplest little exercise in grinding your own sesame seeds to add to your dipping sauce.

Chicken Karaage at Saganoya in Arashiyama: My favorite mom 'n pop in Kyoto. It is just outside of JR Saga Arashiyama Station. It is a bit removed from the crowds and they do a pretty good job of everything. Since I was last there on a weekly basis many moons ago, they've come up with an English menu and the chicken karaage is better than anything I've had at Japanese restaurants in Canada who attempt it and they beat the street vendor stuff hands down.

Scrimping?
There are all sorts of places that specialize in cheap meals under even $4 in Japan now. A lot of them are kind of a workman's kind of place with a meal so cheap and quick that it would make you wonder if you could do it more cheaply at home. Some just specialize in gyuu-don, a bowl of rice covered with a layer of shaved beef. There are countless other "dons" too that are served with chicken, tempera, yaki-tori, the aforementioned pork cutlet and more. Be careful considering how much you want to scrimp on these things. Ultimately quality is being sacrificed but more importantly in the Japanese diet you would be moving away from the ideal of a daily menu that features 50 different ingredients. Rather than trying to break things into 4 food groups and proceeding from there, they basically push variety and consequently moderation of each of those ingredients.
Random thoughts:
I have told Nadine that there are targets on the urinals in the men's room to help with aim. In response, she told me there were urinals in the women's rooms. (She will look for targets next time.)

I have managed to refrain from buying books on this trip. I ogle the three-volume Japanese version of my favorite Japanese author's current book which won't be translated into English until fall 2011.

Hiking seems to be the reserve of the older crowd in Japan. There are very few people out on the trails who were younger than us.

I'm not sure if Japan's technological wonders are in as much abundance as they used to be 10-15 years ago. I've yet to see that must-have device or gadget that would compare with mini-disc players of the 1990s. They didn't really cross the pond to North America in the end anyhow.

Using the bullet train as much as I have this trip has made me wonder about how the train has altered everyone's sense of space or Japan's size.
Posted by Pat at 6:48 AM