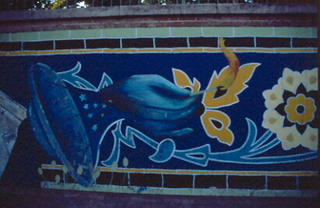 The drive to my first day of classes as at 7:45am, when the shops were closed or, in the case of one, there was a shorter line. Traffic was just as breakneck as the day before and I had a chance to reinforce some of the images rather than let them blur by unaccounted for like the details of a dream. Hopefully I managed not to gape as much this time around.

The Kabooky Fried Chicken, yes a KFC from what I could tell of the font and the colors, was indeed a reality the second time I passed through a chaotic rotary early in the journey. I should also add that there was a sign for an establishment called Aphrodite, but I have no idea what they merchandise in.

The highways in their own small way provide an account of the nation's history. There are a few American cars, but none more recent than a 1979 Cadillcac. The rest of them are much older and in no condition to pass a stringent Canadian auto inspection. The more recent models are Peugeots and KIAs (built in Iran) and none of them have the character that you would expect to see if you had a steady diet of dusty decrepit images of various countries in National Geographic. There are also a few domestic cars. Gas is a tenth of the price in Canada, thanks to government subsidies.

I have yet to see a gas station, however. There are plenty of mechanics, not to mention cars stranded on the side of the road after giving up the ghost. The assertiveness of drivers is beyond descripion. They drive so close together that I was tempted on one occasion to reach out and flick the gas door shut on a passing car. One driver even managed to pull a U turn in full on traffic and did so from the lane outside the one my taxi was in. He cut across us and another lane of traffic and then jammed his nose into the opposite bound traffic and nudge his way into the preferred flow of traffic. Okay, I gaped at that.

Through it all though the pedestrians weave in and out of traffic, knowing enough to cede the right of way. One of the professors advised me to be careful crossing the street and I told him that I was never going to cross the street.

In the classroom, I had just enough of an adrenaline rush to stave off the jet lag and get a little silly at times. The class was patient with my comedic forays to keep their attention during the 3 1/2 hour classes and laughed enough to assure me that their comprehension is exceptional.

During the breaks , a few students mill around with questions and invitations to see a bit more of the city or country.

Younger people are quite open expressing their concerns about Iran's future, motivated in part by the restart this week of the country's nuclear program. I've also met another faculty member from U of C who is staying at the same hotel as I am.

Last night I had the feeling that this entry would be brief. Ha.
Posted by PH at 7:11 AM