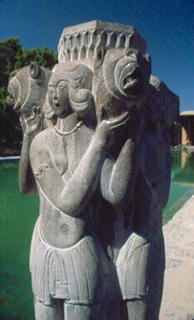 Isfahan. Previously known to me as the title of a Duke Ellington tune, composed by Billy Strayhorn, it now has an E and conjures up nuclear fears, anxieties or paranoia. Take your pick. This is where I am spending my first real opportunity to play tourist and it is good to be here and especially be back on the ground during an August that is asking to be dubbed crash-a-day-month in the airline industry. Sanctions have made it hard for Iran to stock itself with the most modern Airbuses or Boeings and rely on older planes from dodgier manufacturers.

I'm in a hotel just across the street from a mosque but it is closed six days a week. I've held off on the main part of the city, which would draw me back like a magnet for the rest of my time here. Instead I've headed south to an Armenian neighbourhood and visited an old church that has am interesting mix of Christian and Moslem architectural features. To end off the day I head up to one of the many historic bridges in the southern part of the city and have tea under the bridge and cross back and forth a few times to watch people going by and take in the scenery.

For dinner, I stop in at a restaurant and accept the maitre d's recommendation of chicken in almond sauce. It is not the most attractive thing I've eaten - the chicken comes in a bowl covered in a dark, dark brown sauce but was quite surprising and somehow sweet. I ate more than I could. Before heading home, the maitre d' asked me to sign a guest book that he kept for foreigners. I obliged him and wrote a note and added my humble business card for effect. I leafed through and was surprised to see the name of Michael Ignattief, fellow Nova Scotian, Harvard professor, occasional Globe & Mail contributor and possible to contender for the Liberal party leadership. Missed rubbing elbows with him by four months.
Posted by PH at 8:51 AM