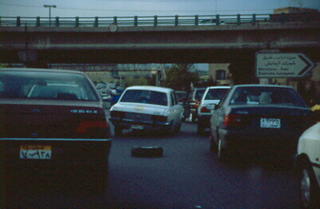 Prior to coming here I was conscious of the possibility that I might avoid the maximum amount of adventure that this trip might present me. A little voice has been coaching me to make the most of this and experience as much as I could rather than retreat into a cautious routine for the sake of self-preservation or surrender to all of the negative western news about the place rather than acknowledging and abiding by the respect and hospitality that I experience in the school and the hotel. I have been hoping to form a new habit that would allow me to make the most of this.

To this point I have experienced quite a lot and on my first day off I'll venture out into the "real Tehran." The adventure has been well-managed and supervised - the safety net always there and the feeling that there are discussions and substantial planning going on behind the scenes to assure my safety, comfort and well-being.

I guess that confidence about my safety would explain my morning drive today. My taxi driver is tailgating a Toyota and is at the very most 2 metres off the leading car's back bumper. For the hell of it, I glance over at the speedometer and see that we are traveling at 110 km/h. For some reason I don't flinch and my reaction amounts to, "110, neat."

I have been terribly remiss to this point. I have a chaperone-administrative assistant-guide at the university who is looking after me. He is trying to get into a university where he can continue his Ph.D studies but in the meantime he is working as the ultimate multi-hyphenate.

During the drive home yesterday, I was a bit curious about music here. My cab drive unlocked his glove box to reveal a CD-rom drive from a computer which he rigged up as a car stereo. It gave me the impression that there was something illicit about listening to music in this country, but I over looked the fact that we were in an old, old Paykan - a boxy little number that makes me think back (fondly) to the 1971 Renault my father owned. This afternoon, however, my driver had a more modern car and a fancy schmancy Pioneer deck that played MP3's not to mention pump out the bass at a volume that made the image in the rear-view mirror blur to the softness of a watercolor painting. There is music here, I've yet to hear any Western stuff that managed to get in though.

In class however, I learned what has gotten in. While prepping the class for a listening exercise, I was informed that the students had seen that old Canadian drama North of 60. I immediately wanted to wax nostalgic about watching it Thursday nights while I was teaching up there. That connection is just one of the more tangible signs of the bond that is forming between the class and I. After class this afternoon, a clutch of them huddled around to ask what I knew and thought of the country so far. They were quite impressed with my knowledge of Iran and its history. This I have to credit to the Lonely Planet.
Posted by PH at 7:26 AM