The elevator from hell 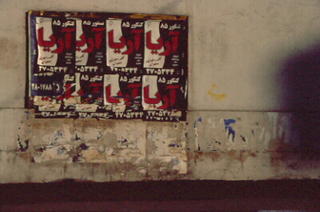 No I did not get trapped in one or anything like that today, just a title to sum up my experiences of Iran radio today. It is a reference to a contest I heard on a radio station in Montreal where they played muzak versions of hit songs and challenged listeners to identify them. This morning I heard a muzak version The Chicken Dance just after the morning news and in the afternoon a muzak version of "Celebration" by Kool and the Gang. And I thought they didn't let Western music into the country. The Chicken Dance might have been improved now that I think of it.

A bit of a grind today and I've got two more days before I get a few days off. Three to be exact. My calendar has filled up with a bit of sight-seeing guided by my students. (Probably NOT all 75 of them.)

The sights continue to baffle and catch my eye, the only problem is that the taxi is chugging along too fast for me to photograph them all. Hopefully when I'm on foot instead of in the taxi I'll be able to capture a fraction of this with the camera. Plans for the weekend include the old US Embassy/ Den of Espionage, the Golestan Palace, a few museums and a few hipper, modern (I think) places where real Iranians lead their everyday lives. Next week I'll be off to Esfahan. The ancient jewel of Persian arts, architecture and culture. I'll do a lot of sight seeing then and go through film like I've never seen the place. Makes sense, no?

For the demands of the routine over the last week, it has been one where I've managed to keep up some good habits. Eating the fruit that is in my room everyday, doing a bit of stretching to start off each morning, and doing a very good job of the early to bed, early to rise routine as well, though I'd dance in the streets if I slept in until 6:30. I'll eat more eggs this month than I did during my eight years in Japan, but if that's my vice for the month I'm living well.
Posted by PH at 9:43 PM