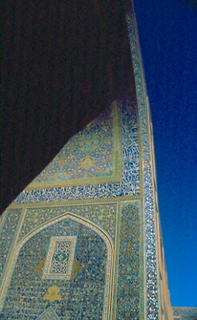 It seems that my visit to Isfahan has grown to something of legendary proportions. Sitting down to lunch yesterday with the head of the civil engineering department, I was asked, " What's this about you being up at 4am to take pictures?"

I promptly answered that I was not up until 6:15 and that it was for sunrise shots of the Imam Mosque. My final day in Isfahan was a bit of a whirlwind as I tried to do a final bit of souvenir hunting, take in a few sights and reunite with my friends from the night before for lunch at the same restaurant, this time with our Iranian friend able to join us without breaking (family) curfew. While shopping, my chaperone took it upon himself to bargain as much as possible, meeting with mixed success. He seemed to get a good deal at one store, but when negotiating at another he only managed to save me about 10 or 12 cents. It seems like a lot when it is 1000 rials.

Lunch was as pleasant as dinner the night before, though not as leisurely as it was by moonlight. Promises were made to meet again in Tehran before I depart.

The drive to the airport was fascinating. The same route as the drive into town earlier, but the sight of goat herders and their flocks or herds hiding in the sparse shade of roadside clumps of trees while the goats munhced on smashed watermelons to keep cool, made me wonder how far removed they were from the carpet merchants who set upon me at every turn and provoked me to tell my Iranian friend, with a dramatic, canine quiver of the nose, "They smell money."

It is now definitely the homestretch. I've said that a few times over the last few days but with three days left in the classroom, I can definitely say it with a bit of confidence. I'm still trying to book a flight out of the city for Monday morning and if that goes well I'll be groggily plodding around my apartment en route to my fridge. In the classroom, I've emphasized the need for the students to finish things off with a bang.

Appointments and plans are being arranged with students and staff for a final few nights out before I say good bye and there have even been a few offers to have a guided carpet buying trip. While I have all of those activities to look forward to, it has been nice to let my thoughts drift to more mundane matters such as whether or not to send my next batch of laundry out or to pack it and wash myself upon my return. I just need one more work shirt cleaned before I'm through. I would, however, love to have a bit of fabric softener for my sink washes. (I'm counting those rather than the days.)

Yesterday might have been one of my last taxi drives back to the hotel. I made a point of chatting with him as much as possible last night and ran through a checklist of the places I visited during my excursion. He nodded approval and was satisfied that I did not miss or skip too many of the essential places. After that we talked a bit about the cars that we saw on the highway.

A surprising conversation with one of the students was a highlight of the day. Apparent news reports about a Hockey Brawlers contest in BC made the news here. I had a hard time putting the hockey goon or policeman into a perspective that a foreigner who had never seen the game before could understand. Ideally I'd have a DVD or tape of a game where the build-up to a fight was obvious and it was in a bit more context. I wonder if it was an attempt to discourage people from immigrating to Canada.
Posted by PH at 7:57 AM