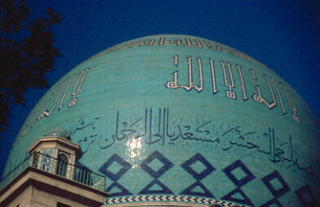 A lot of people have been asking, especially over the last few days, what I have thought of Tehran and Iran so far. While it has been easy, and accurate, to say that it has been interesting and exciting, not to mention the fact that the people have been exceptionally friendly, I can still say that I have not been overwhelmed or shocked by too much of what I have seen, with the exception of the traffic. (My students would scramble to parse out and re-engineer that sentence. Other would ask me to stop read John Fowles, to which I could only say, "I'm not, I'm not.")

With the exceptions of the drive to work, there have been few moments when I've seen a gritty or sordid side to life here. People, however, have advised me not to go to southern Tehran and continue to tell me that this part of the city is exceptionally wealthy. My students are well-educated and represent, I believe, a relatively small percentage of the population. After visiting one student's home, I got the feeling that the standard of living that my students enjoy is much closer to my own than I feared it would be prior to visiting Iran.

At any moment though, there is a chance that I will get nudged out of the secure cocoon I've been in at the hotel and the university and that opportunity is most likely when I hop in the cab. During one late night drive to the hotel, in a car so old that I doubted it could climb the steep mountains to my hotel, that feeling of precariousness emerged for a moment. There was no element of fear, mind you, but the extra chill of excitement that came from feeling things were a bit more authentic. I sat with my knees drilled into the back of the front seat as the boxy little thing chugged and spurted along spewing out who knows what from an engine that was likely wouldn't know a catalytic converter from an airbag. Somehow the whole scenario conjured up notions of a frosty drive through Moscow, hunched over to either peer through the half-moon of clear window near the dashboard heaters or to keep out of sight of whatever cloak and dagger entities there might bein the trailing car. I'm not sure where this whimsical train of thought came from, the cooler night breezes, the car, the hour, or the fact that I had seen another side of a city the aspires to have it so much more together than it does now.

Apart from that kind of moment, the biggest thing to adjust to has been the ongoing bargaining in the classroom and the close proximity I find myself at when I am in a conversation. While the culture shock is not so strong my eye is constantly captivated. There is something about the height or angle of the sun that colors everything in hot, parched tones that suggest a certain weariness or decrepitness that is rarely evident in high-sunned, cool Calgary. The building under construction somehow possess both optimistic potential and a weary abandonment, especially when the steel and brick guts of the building are still exposed and suggest that the building's future could go either way before eventually being completed with polished marble facades. (In the wealthy north.)

I've begun to develop the impression that it would be easy to travel to a place like this and isolated oneself from anything that would register the words "third world" in one's head, at least not in the starkest terms that we can see on the news. Students insisted a few nights ago that they could be just about anything here despite the sanctions and the simmering differences with the U.S. The mentioned to one another lending DVD's of Mr. and Mrs. Smith or Monster-in-Law with one another while George Michael blared out of their car stereo at the indifferent police.
Posted by PH at 12:48 AM